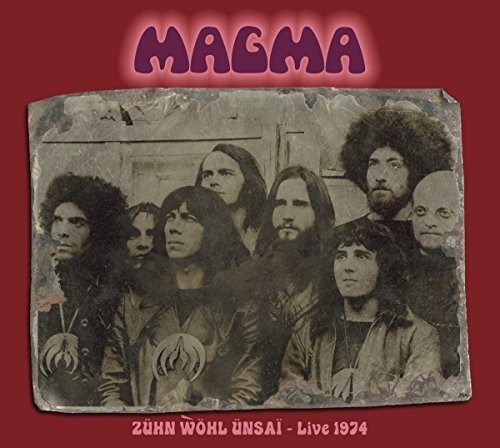 Wherever they perform - whether at the legendary hippie Burg Herzberg Festival or at the Leverkusener Jazztage in Germany at the end of the 90s, the Nancy Jazz Pulsations Festival in '76. Or the renowned Bell Atlantic Jazz Festival in New York- French cult ensemble MAGMA has always left their fans as well as the curious Ă˘?zuninitiated" stunned and in awe. Led by their drummer and "master of ceremonies" CHRISTIAN VANDER, the band has consistently poured their tonal magic potion, a substance brewed from 20th century classical music (Stravinsky, Orff, Bartok) and radical tendencies in 60s and 70s jazz and rock, over a spellbound audience for over 45 years. Despite their more jazzy leanings, MAGMA has always been able to attract a more rock-oriented, young audience from the very beginning. The latter due to VANDER'S fascination by the cathartic nature of rock music's optimistic spirit in the late 60s, similar to many of his famous jazz contemporaries including JOHN MCLAUGHLIN, CHICK COREA, and MILES DAVIS. As a result, he decided to orchestrate his up-to-one-hour-long suites with all the ingredients electric rock music had developed by the turn of the century. The on this LPs documented Live Performace is recorded at 'Magma's first concert in Germany on February 6th 1974. This official, professional and sonically improved Radio Bremen recording of this rather short-lived line-up contains a slightly shorter than usual version of MEKANA?K DESTRUKTA?ĂˇÂş? KOMMANDA-H, and with the remaining tracks SOWILOI, DRUM SOLO and THEUSZ HAMTAAHK represents an indispensable supplement to MAGMA's other live albums released on their own label, SEVENTH RECORDS.
Prices on WaterlooRecords.com do not reflect the prices in our retail store location.
"In Stock" on WaterlooRecords.com does not reflect 'in stock' at our retail location, however it means we have quick order fulfillment (generally 2-3 business days).
back to top