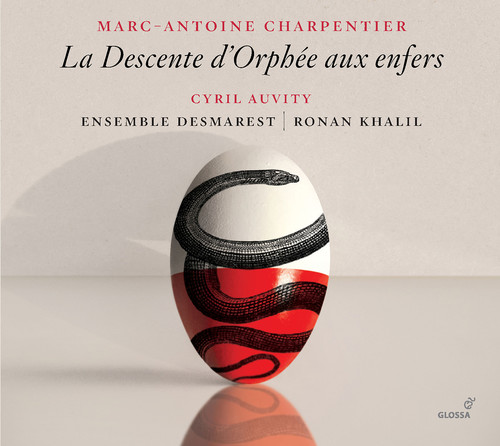 Cyril Auvity heads the cast in a new recording of Marc-Antoine Charpentier's La Descente d'Orphée aux enfers in a production being released by Glossa. Auvity is the lovelorn Orpheus who ventures, with his lyre, into the Underworld to plead with Pluto (Etienne Bazola) for the return of his Eurydice (Céline Scheen), struck down in her prime by a snakebite, being encouraged in his efforts by Proserpine, the wife of the ruler of Hades (Floriane Hasler). This is a two-act chamber opera, written in 1686, and it is not known whether Charpentier ever composed any more music for the piece (the drama stops at a tantalizing moment in the well-known story). Even still, the composer appears to have invested substantial inspiration into the work, which will have been performed in front of the composer's patron, Mademoiselle de Guise by a group of singers working within the limitations imposed by Jean- Baptiste Lully's "musical monopoly" of the time. For this recording, keyboard-player Ronan Khalil directs his Ensemble Desmarest. The demanding lead role of this entertainment continues Auvity's strong current presence in French Baroque music-making - as well as his connection with Glossa. His Orpheus follows his previous Charpentier Stances du Cid release on the label, as well as appearances in operas by Campra, Destouches and Lully.