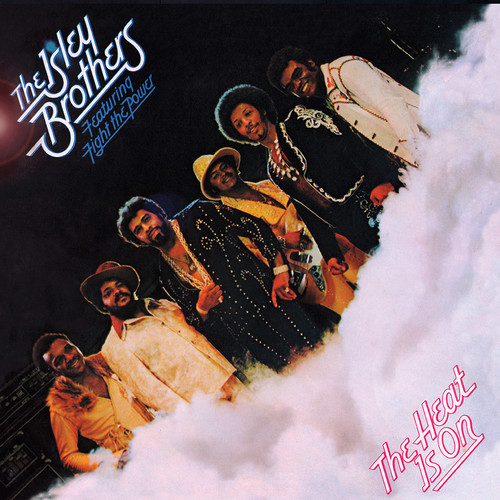 The Heat Is On [Limited Edition Red Vinyl]
Artist: The Isley Brothers
Format: Vinyl
New: Not in stock
Wish

The Isley Brothers are truly a worldwide gift to soul, rock and pop music enthusiasts everywhere. Over five decades in the music business and still going strong, their hit albums and top charting singles continue to captivate millions of fans all over the globe. In the early seventies, brothers Ronald, Rudolph and O’Kelly Isley expanded their band with brothers Marvin and Ernie , plus cousin Chris Jasper, as their hit making sound excelled into new stratospheric heights.

The sound was new and exciting, solid street soul fused with rock, a brand new kind of soul, as the amazing The Heat Is On soared to the top rungs of all the soul and pop album charts, becoming their biggest selling album to date. This masterpiece smash included enough hits to be called a greatest hits album in its own right. Especially when you get smash hit singles with the anthem Fight The Power (Part 1 & 2, the balladry of For The Love Of You (Part 1 & 2), and the rockin’ party sounds of Hope You Feel Better Love (Part 1 & 2) All in all, making this amazing platinum plus smash one of the most revered in their long-lasting and huge catalog of Isley Brothers’ classic recordings. Friday Music is no stranger to the music of the legendary Isley Brothers. That is why we are so very proud to announce another installment in The Isley Brothers/Friday Music 180 Gram Audiophile Vinyl Series with their legendary masterpiece The Heat Is On. Mastered impeccably by Joe Reagoso (Isley Brothers/Donny Hathaway/Aretha Franklin) for the first time on audiophile red vinyl, The Isley Brothers The Heat Is On LP will truly become one of the most important and historical audiophile soul titles in quite some time. We further enhance this limited anniversary edition with the original stunning gatefold cover featuring the original artwork elements, plus the original lyrics and additional photos of the band now on a keepsake insert. The Isley Brothers… The Heat Is On….Impeccable first time audiophile translucent red vinyl + gatefold cover presentation……From your friends at Friday Music.