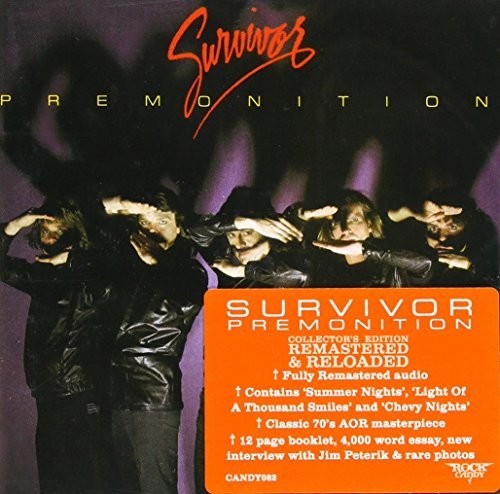 Digitally re-mastered edition of this 1981 album from the AOR/Melodic rockers. Recorded in Los Angeles, the band was allowed to self produce, thus further enhancing the likelihood that a rougher, more immediate sound could be captured. Premonition didn't disappoint, showcasing the band in an upbeat and, dare we say it, far more aggressive mood, harnessing a sound that leaps out of the speakers and wrestles you to the floor with little room for pleasantries. Naturally, the bands greatest asset was still very much in focus; quality songs with hooks and melodies to die for. Tracks such as 'Summer Nights', 'Light of a Thousand Smiles' (inspired by Journey), 'Poor Man's Son' and the balls-out rocking of 'Chevy Nights' all contain a magical mixture of streamlined efficiency and brutal honesty, resulting in a sound that virtually defined the musical climate. It certainly turned heads; most notably that of Sylvester Stallone who requested the band write a theme song for his upcoming Rocky III movie. No prizes for guessing what came next. Rock Candy. 2010.