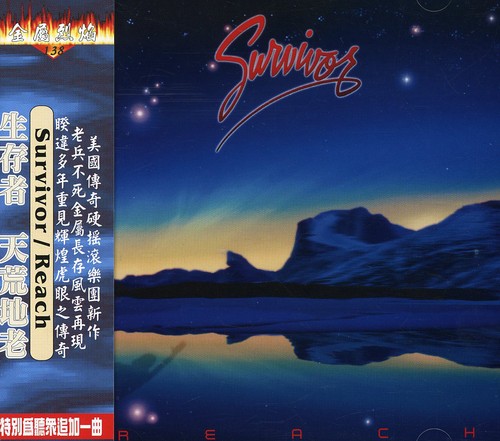 Well-known all over the world for their hit song 'Eye of the Tiger' for the movie 'Rocky III,' SURVIVOR singles have since consistently topped the charts worldwide. These hits included 'Burning Heart,' 'Vital Signs,' and 'Is This Love.' Now, 17 years after their last studio album, Survivor are back with a brand new studio album. This album meets the great demand of the existing fans who have been asking for years for new songs that could continue in the legacy of the great sound the band created in the past! Frontiers Records. 2005.

''Reach'' is the 8th album from the rock band Survivor, released under Tower Records and the band's latest album in 18 years. Some of the material originates from a period from 1993 to 1996 when the band recorded demos for an unreleased album that can be heard on the ''Fire Makes Steel'' bootleg. Following the release of this album, singer Jimi Jamison left the band. - Wikipedia