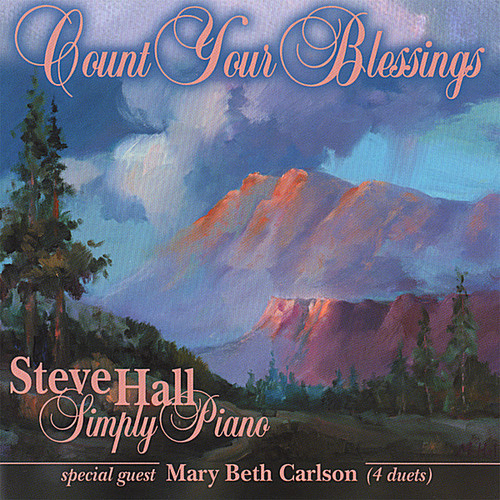 Steve Hall Bio International Steinway Artist, Steve Hall, has been playing the piano since the age of five, having been classically trained until the age of eighteen. He then developed a music career and continued to pursue it on a part-time basis, playing at thousands of weddings and private parties. Upon graduation from USC (majoring in history with a minor in music,) he began a management career in banking, which lasted almost twenty-five years. Steve has been honored many times in banking, yet music has remained his passion. He became known as 'The Banker With The Beat.' At every event where he performed, Steve's music and styling received tremendous attention. Enthusiastic fans began to request recorded samples of his music. Encouraged by his family and friends, and with overwhelming response, Bankbeat Productions, Inc. Was born in July of 1992 with the recording of his first album, 'Notes of Romance.' The music sold rapidly and was soon picked up by national distributing companies for sale in gift shops, Hallmark stores, boutiques, book shops and privately-owned businesses. Thirteen years and many recordings later, Bankbeat Productions, Inc. Has sold over 1.6 million albums! The company currently offers thirty-one musical collections. In addition, Steve recently released his first DVD, 'All Things Bright and Beautiful,' which features captivating scenes of nature with selected songs from his inspirational albums. Steve categorizes his music as 'great-sounding, heart warming, familiar tunes.' He attributes his musical success to his attentiveness toward people and what they want to hear. His father had always told him to play from the heart, and both his mom and his dad encouraged him to share God's gift of music with others. Indeed, it is his music's uplifting appeal and familiarity that has earned Steve a loyal following from people of all walks of faith. With the success of three more romantic albums, 'Coming Home', 'Timeless Love', and 'Gift of Love', Steve began to concentrate on recording the music of his childhood...inspirational music. Despite the skepticism expressed by his distributors for the appeal of inspirational music, Steve released his 1996 recording, 'On Eagle's Wings.' This album has surpassed sales of 650,000 units and has brought heartfelt correspondence from across the country. It has been welcomed by folks with open arms, and remains the top selling album in the gift market today! 2005 releases included the sequel to the popular 'On the Countryside' recording...'Country Crossroads', and Steve's 2nd piano solo album 'Serene Horizons' (which was released in the Fall). This latest CD has proven to be very popular, with record sales in a short period of time. Performing on his own 9 foot concert Steinway grand piano, Steve simply plays from his heart directly to the listener. In late Spring, 2006, both Steve and his friend, Steve Donovan, will release their latest CD 'Swept Away' (an encore to 'Both Sides Now'). The beauty of this project is that it is simply their performance on two Steinway grand pianos, with no other instrumentation. The song titles promise to make this new effort a sure favorite! Steve has recorded a variety of music styles, including popular show tunes, standards, classical, romantic, inspirational, Celtic, Christmas, lullabies, patriotic and now, country. He considers himself very blessed to be surrounded by such gifted musicians and to have met so many wonderful people relating to the recording experience. Steve continues to perform solo and with his ensemble in many venues throughout the United States and Canada. Steve, his wife, Robyn, and three sons, Andrew, Peter, and Daniel reside in Southern California.