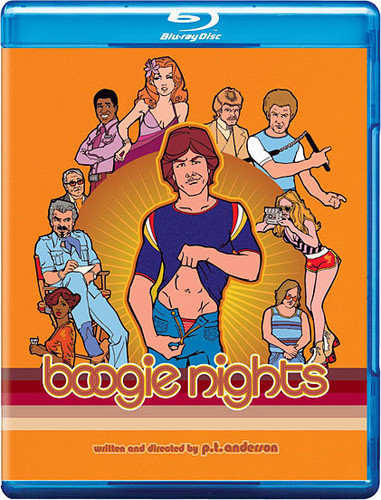 While set within the milieu of the Los Angeles adult film industry, Boogie Nights is less a film about pornography than the serio-comic story of a group of misfits, losers, and lost souls who are embraced by Jack Horner Burt Reynolds, a director who makes "adult films, exotic motion pictures." In 1977, while hanging out at a disco, Jack spots Eddie Mark Wahlberg, the new busboy at the club, and tells him he's convinced "there's something wonderful inside those jeans waiting to get out." Jack knows his business well and his expert eye has not betrayed him; Eddie is a pornographer's dream -- good looking, remarkably endowed, and willing and able to do as many takes as might be needed.

The product of a woefully dysfunctional upbringing, Eddie is not terribly bright but is very ambitious and eager to prove he has a "special something" to share with the world. Eddie changes his name to Dirk Diggler and quickly becomes the biggest star in hardcore. Working alongside "Dirk" in Jack's films are Amber Waves Julianne Moore, a porn actress who applies her misplaced maternal instincts to anyone who needs nurturing; Rollergirl Heather Graham, a cheerful but blank-faced high school drop-out who never removes her roller skates; Reed Rothchild John C. Reilly, a none-too-bright actor, aspiring magician, and failing songwriter; Buck Don Cheadle, a black actor fascinated with cowboy iconography who wants to open a stereo shop; Scotty J Philip Seymour Hoffman, a stocky and awkward soundman infatuated with Dirk; Little Bill William H. Macy, Jack's assistant director, who has trouble dealing with his wife's brazen infidelity; and Colonel James Robert Ridgely, Jack's backer, who has a weakness for young girls. In the brief, late-'70s moment when porn was chic and sex films seemed poised to break into the mainstream, Dirk becomes a star and Jack a respected name. But a few years later, drugs and pride have taken their toll on Dirk and many of his friends, while the advent of the VCR radically changes the adult movie business; Jack goes from being a "filmmaker" to manufacturing and wholesaling videocassettes, a wealthy but emotionally broken man. In his second film, wunderkind director Paul Thomas Anderson juggled a broad range of characters in a manner reminiscent of Robert Altman's ensemble films, making Boogie Nights a sad but funny story of a makeshift family of damaged people and what happens before and after their brief moment in the sun.