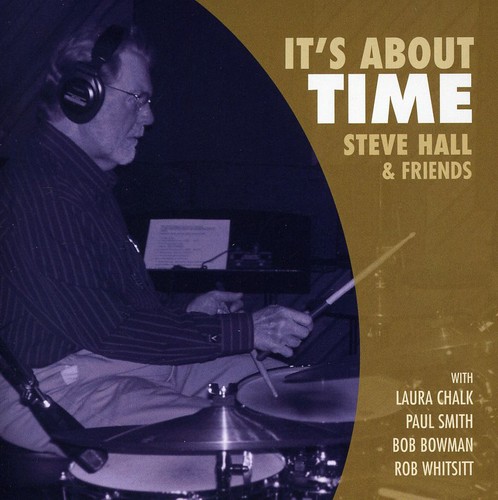 It's About Time
Artist: Steve Hall
Format: CD
New: Not in stock
Wish

The drum serves as the foundation in most any piece of music. It's the home base in musical composition. It's the place where the song's pulse and energy reside, the place that holds the beat steady for the other instruments when they return from their soloing flights of musical fancy. Drummers like Buddy Rich and Billy Cobham made a name for themselves by taking off on dazzling percussive forays. But when all is said and done, the drummer's first and foremost responsibility is to keep time. If a drummer can't keep good time, it doesn't matter how many pyrotechnics he has in his percussive arsenal. A lack of timing is where a lack of talent gets exposed. Steve Hall made a name for himself keeping impeccable time. His metronomic, machine like precision is dazzling in it's dependability. His unassuming steadfastness in keeping the beat is as amazingly affecting as any drum solo. Now Hall, like any drummer worth his salt, can and will solo from time to time. But he will be the first to tell you he doesn't much care for it. For him it's all about timing. "I keep time. I stay out of everybody's way," Hall said. The title of the new CD, "It's About Time," by Steve Hall and Friends, is fitting on more than one level. Hall's wife, Ernestine, or "Ernie" as he affectionately calls his soul mate, had been after him for awhile to do another CD. The title serves as both a statement of her relief and a testament of his devotion to timing. Hall, a St. Joseph, Mo., native started playing drums at age thirteen. Fresh out of high school, he got gigs backing up Marilyn Maye and Sammy Tucker at the Colony Steakhouse in Kansas City. His resume also includes tours with the Stan Kenton and Glenn Miller Orchestras. He also backed up musical icons Nancy Wilson, Bobby Darin, Nat King Cole and Peggy Lee. Hall met friends, vocalist Laura Chalk, bassist Bob Bowman, pianist Paul Smith and guitarist Rob Whitsitt ("cream of the crop" he calls them), during evening jam sessions at the venerable Jardine's Restaurant and Jazz Club in Kansas City. The friends played together in different session incarnations but never played together as a group until the recording of "It's About Time." "Paul Smith is without exception a great jazz pianist. He can play anything and always plays it well. I was extremely honored that he agreed to record with me. He also created the Ski-Bop! We never rehearsed. We just talked about what we wanted to do, and that's how it got started," Hall said. The end result is a thirteen song mood piece of classic and original tunes. It's Hall's CD but he gives each player ample solo space, preferring to just drive the beat. But on songs like "Once I Loved," a languid bossa nova that starts out with a pensive guitar solo by Whitsitt, it's hard to ignore Hall's unwavering beat. If you didn't know better you'd swear it was a finely tuned drum machine. The CD starts out with Chalk's airy rendition of Ray Noble's "The Very Thought of You." Chalk doesn't have the clichĂ©d smoky jazz club singer's voice but possesses a vocal instrument that can best be described as fresh and clear as a spring morning rain falling on meadowland grass. She's featured on four tunes on the CD including the poetically forlorn "Dindi." "Laura is an exceptionally gifted vocalist. Her phrasing and time are impeccable. It is always such a pleasure to work with her. Her presence lights up any music performance," Hall said. Hearing Whitsitt's guitar on tunes like the buoyant "Like Someone in Love" evokes images of the blues inflected, hard bop style of Kenny Burrell. And Smith's clean, lyrical style on the piano conjures up the spirit of the late Bill Evans. "Bag Head's Blues", an original tune penned by Hall and Smith, begins with Bowman's funky walking bass solo before moving into a shuffling blues. "Bob Bowman is a drummer's delight. He is the Michael Jordan of the bass. Whenever I would watch Jordan play basket ball I always thought I'd seen the most unbelievable performance ever, but the next time was even more amazing. The same is true with Bob and his music, a very special person," said Hall. The other original tune, "Blues for Arch" pays homage to the great Kansas City trombone legend, Arch Martin. It's a jumping lively tribute that features Whitsitt's scooting guitar work. "Rob Whitsitt is one of the most exciting musicians I've ever worked with. He is at home with everything between the Blues and Ballads. He is also one of the most dedicated musicians devoted to making music beautiful," said Hall. "It's About Time" is simply a fine recording by a fine group of musicians whose musical friendship is illustrated through each song. It's a solid friendship with Steve Hall laying the foundation. Alonzo Weston Reporter/Columnist St. Joseph News-Press This recording is dedicated to the most important person in my world and the true love of my life, my wife Ernestine. It is also an "I Love You" to my children and grandchildren who have never heard me play professionally. I have the deepest respect for the musicians who blessed me with their presence for this project. They are truly my Friends. Laura Chalk, Paul Smith, Bob Bowman, and Rob Whitsitt are absolutely the best of the best. They are what make Kansas City Jazz so beautiful. The graciousness and professionalism extended to me and my wife by Ron Ubel and his staff at Soundtrek Studios was without parallel. Ron and Justin are pure genius. My advice to anyone wishing to record anything: don't go any place else except Soundtrek. It's about time I finally married the love of my life, returned home to Kansas City, and turned back to the music I have loved and lived for my entire life. Steve Hall.