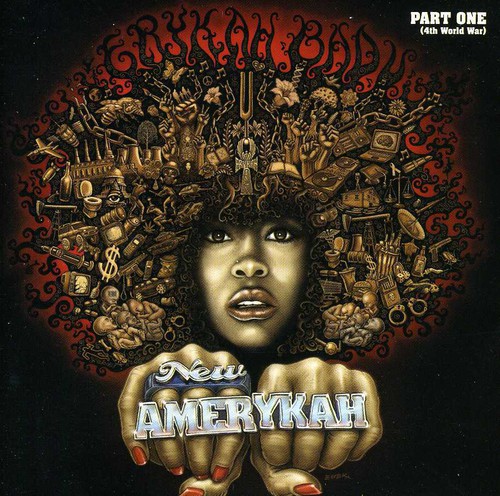 The album debuted at number two on the U.S. ''Billboard'' 200 chart, selling 123,884 copies in its first week. It produced three singles and has sold 359,000 copies in the United States. Upon its release, ''New Amerykah Part One (4th World War)'' received general acclaim from most music critics. It was named one of the ten best albums of 2008 by several music critics and publications. - Wikipedia

The last hit single called "Honey" was by Mariah Carey and we're pretty sure honey was a metaphor for something we're not allowed to extrapolate upon. Erykah Badu's "Honey" very well may be about the same type of thing, from what we can make of the lyrics, yet is actually sexy. That would be a credit to Badu, who seems to be improving steadily with each record, an impressive feat given how highly 1997 debut Baduizm is regarded. Really, though, is it that surprising? She's already collaborated with just about everyone truly worth a damn in contemporary hip-hop and R&B (the Roots, Jill Scott, Common) and this time welcomes 9th Wonder, Madlib and recently deceased J. Dilla to the production fold. Her brand of conscientious soul is never preachy or contrived, just awash in creativity and passion. The only thing preventing her from true prolific artistry is the birth of two children, but hey, we'll let her slide on that.
This website uses cookies to personalize content and analyse traffic in order to offer you a better experience.
I accept Learn More
back to top