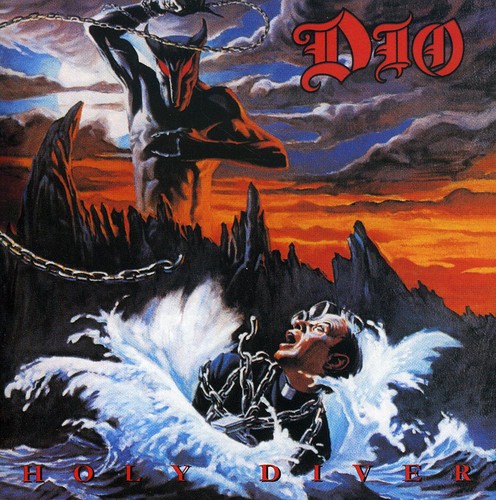 This 2005 import remastered edition features the original 9 tracks, plus an interview with Dio. Recorded at Sound City Studios, Los Angeles, California. Despite recording two hit studio albums with Black Sabbath (1980's Heaven And Hell and 1981's the Mob Rules) and playing throughout the world to huge crowds, Ronnie James Dio left the band in 1982, the year of his final release with Sabbath, the in-concert Live Evil. As soon as the announcement of his departure was made official, Dio began to put together his first solo project. Joining him were former Rainbow bandmate Jimmy Bain on bass, former Sabbath bandmate Vinny Appice on drums, ex-Sweet Savage guitar hero Vivian Campbell, and newcomer Claude Schnell on keyboards. Holy Diver, Dio's band debut, was originally issued in 1983. The album quickly became a favorite among headbangers worldwide and eventually earned the group platinum certification. The somewhat upbeat sounding 'Rainbow in the Dark' was an MTV favorite, while the plodding title track proved to be another standout. Other album highlights include the opening anthem 'Stand Up And Shout', 'Invisible', and 'Don't Talk to Strangers'. Holy Diver proved that Dio's departure from Black Sabbath had not affected his spirits. In fact, he sounds most inspired here, aided by his new, hungry backing bandDio's classic album from 1983 has been completely remastered and boasts a new interview with Ronnie James Dio conducted by Paul Suter at Ronnie's home studio in July 2005. Universal.
Prices on WaterlooRecords.com do not reflect the prices in our retail store location.
"In Stock" on WaterlooRecords.com does not reflect 'in stock' at our retail location, however it means we have quick order fulfillment (generally 2-3 business days).
back to top