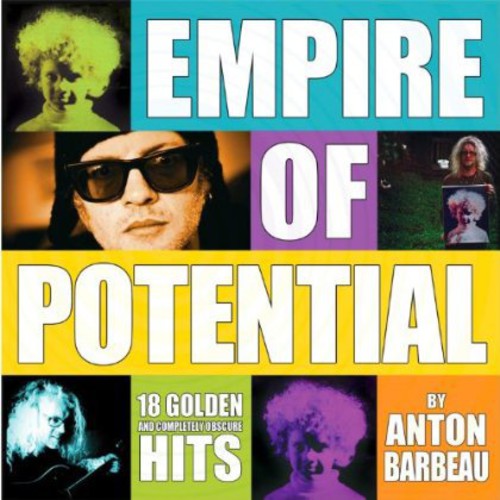 Anton Barbeau hit upon the idea to assemble the retrospective EMPIRE OF POTENTIAL after a gig in Istanbul, when audience members had trouble choosing from the 13-CD assortment that makes up his back catalogue. EMPIRE OF POTENTIAL spans an 18-year-career - from Barbeau's days as golden boy of Sacramento's pop scene to his almost totally obscure psychedelic experimentation in the UK and Europe. Ever the pragmatist, Barbeau thought a greatest hits package - songs that have been consistently popular live, received radio play, or even gone viral on YouTube ("Automatic Door") - would be a good way to give old fans and new listeners a taste of his full range of work without having to drag stacks of CDs on his travels. The 18-song set covers Barbeau's entire career, with a slight slant towards material from his earlier years in Sacramento. "I've been thinking about Sacramento a lot and wanting to reconnect with people back home, while bridging songs I wrote in California with work I'm doing now." Barbeau notes there could have been several versions of this collection. "One of the challenges was trying to offer as many sounds and styles as possible, but often quieter, emotionally direct songs ended up being picked over guitar rockers or experimental electronic pieces." Some of the classics have been updated. "The Banana Song" was re-recorded in Berlin and features former Soft Boys/Egyptians Andy Metcalfe and Morris Windsor, as well as longtime collaborator Scott Miller (Game Theory/Loud Family), who also appeared on the original recording. Robbie McIntosh played electric guitar for a new version of "Losing You Makes Crucifixion Easy" - originally inspired by the Pretenders' "Back on the Chain Gang"- along with Michael Urbano, Andy Metcalfe, and Kevin Allison. A newly recorded version of "Pilot Plane Passenger", a song written by a teenage Anton, is included here for the first time on CD. The collection showcases many collaborations over the years, including work with Miller, Oxford folkies Stornoway, psych gods The Bevis Frond, various members of Cake, Allyson Seconds, Barbeau's first band The Joy Boys - who used to cover Soft Boys tunes - as well as with Metcalfe and Windsor, who with Barbeau today form his new band Three Minute Tease. The release of EMPIRE OF POTENTIAL puts one era to rest and marks a shift in direction for Barbeau, who's simultaneously preparing to launch Three Minute Tease's debut album and looking forward to more writing, recording, and gigging with his first dedicated band in many years.
Prices on WaterlooRecords.com do not reflect the prices in our retail store location.
"In Stock" on WaterlooRecords.com does not reflect 'in stock' at our retail location, however it means we have quick order fulfillment (generally 2-3 business days).
This website uses cookies to personalize content and analyse traffic in order to offer you a better experience.
I accept Learn More
back to top