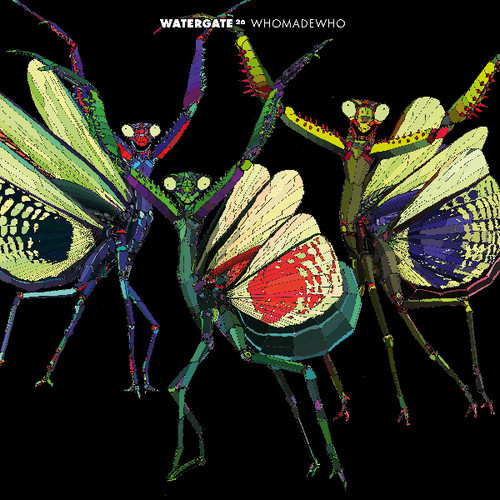 The dynamic trio from Copenhagen, whose music blurs the lines between countless genres, steps up to deliver the next installment in Watergate's mix series. Jeep Kjellberg, Tomas Barford, and Tomas Hoffding, better known as WhoMadeWho, have spent the last decade cleverly and expertly traversing an array of genres blending facets spanning from club to rock music. Applying elements of pop, indie, techno, disco, punk, and funk and anything they can imagine, the outfit sets themselves apart from other club music yet, all the while they maintain an underground sensibility making WhoMadeWho the perfect candidate to take the driver seat for Watergate 26. The mix is quintessential WhoMadeWho as they slickly weave their way through a plethora of sounds without missing a beat. From the onset, deep and lush grooves coalesce with moody atmospherics on tracks like Ă–ona Dahl & Dance Spirit's "Break The Stillness" and WhoMadeWho's rework of Magit Cacoon & Lonya's "Shma IL" before slowly edging the intensity up into Artbat's standout edit of WhoMadeWho's "Montserrat" and WhoMadeWho's remix of Concret & Tyu's "BlueBlackYellowGreen" where genres lines begin to blur. As the mix progresses the drama unfolds. Tim Engelhardt's "Under Armour" and Ruede Hagelstein & Justin Evans's "Love Over Pyramids" provide the ideal measure of psychedelia preluding an insanely slick transition into cinematic breakbeats on fellow Copenhagen cohort Kenton Slash Demon's "Arp 8" setting the stage for one of many highlights of the mix; Artbat's "Closer" featuring WhoMadeWho. Moving into the latter half of the 87 minutes the trio dive into headier territories showing their affinity emotive moments with Otto B's "Willy" and their own remix of Alex Schaufel's "The Day Of Rebirth" which cleverly melts into sultry smooth, mesmerizing cuts like dOP's "Radiowaves" and WhoMadeWho & Ruede Hagelstein's exquisite cover of BjĂ¶rk's "Violently Happy" creating a gorgeous entrance for the finale. With a stunning crescendo Speaking Minds & Amarcord's "Blue Days" is a valiantly emotional and epic moment that is only surpassed by the stunning and timeless WhoMadeWho's absolute future classic "Smile" bookending a grand closure to a truly sincere and masterful musical journey. Also features Chaim & Jenia Tarsol, Mathias Schober, Concret & Tyu, Stereocalypse, Clarian, Echonomist, and Otto B.