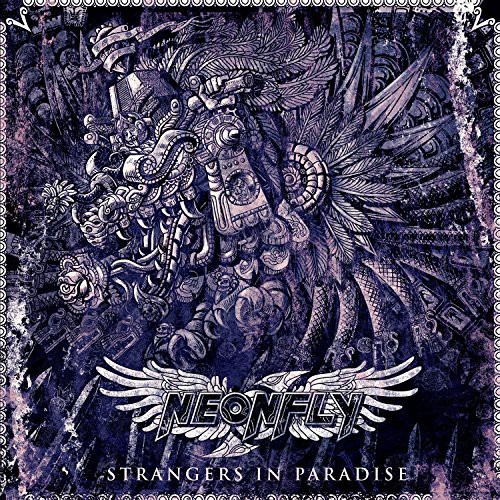 Mighty new hard driving melodic metal rockers Neonfly are set to release their awesome, hotly anticipated second studio album 'Strangers in Paradise', produced by Dennis Ward (Angra, Michael Kiske, Krokus, Pink Cream 69, Unisonic), on Inner Wound Recordings on November 28th in Europe and December 2nd in North America. Neonfly, a dynamic young band who have already won a slew of eyebrow-raising high profile support slots on tours with the likes of Alice Cooper, Magnum, H.E.A.T, Sonata Arctica, Pagan's Mind and Freedom Call, have now been confirmed as special guest act on Dragonforce's (mostly sold out already) upcoming September / October UK tour. Neonfly, who comprise Willy Norton on vocals, Frederick Thunder on guitars, Patrick Harrington on guitars, Paul Miller on bass and Boris Le Gal on drums, won hordes of new fans over in the UK when they went down a storm on Magnum's Spring 2014 UK tour. Powerplay reviewed them at Nottingham's Rock City, the night after their van had been broken into and nearly all their gear, (worth about ÂŁ10K), had been stolen;.
Prices on WaterlooRecords.com do not reflect the prices in our retail store location.
"In Stock" on WaterlooRecords.com does not reflect 'in stock' at our retail location, however it means we have quick order fulfillment (generally 2-3 business days).
back to top