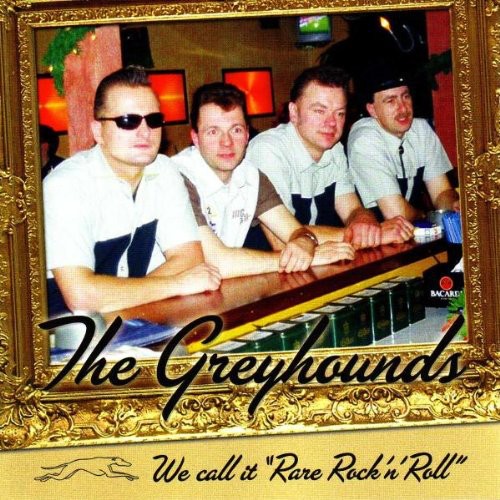 The Rockabilly combo The Greyhounds coming from Flensburg/Germany and can call itself probably the most northern band of the German rockabilly scene. It originated from the former Band ' The Boppin' Passions', which had been based in June, 1997. At that time still as a trio, the boys started with playing authentic rockabilly. Soon after their foundation they put their first 7 " single, released at the legendary rockabilly record label of Willie Lewis / Denver (R-504 / 'Little Bop of baby'), on the market. Furthermore 1999 the recordings for the LP 'Rockin' By The Moon' has been published on Rebel Music (LP RM 12001). In autumn, 1999 Nils Andersen bumped as an additional guitarist to the troop and provided for a fatter sound. Till then mainly have played authentic rockabilly, from now on the formation developed more and more their own style. Herbert Herbert StĂ¤cker, whose roots are mainly in neo rockabilly, had written some new songs in that style and they proved to be very well accepted from their fans. The new style and sound required a new name for the band. So The Greyhounds were founded. From now on it went precipitously uphill. In 2002 appeared the first CD of the four musicians from the 'North". The album 'Nightlife' was published at PART RECORDS (PART CD 645.001), and provided for a fickle increase of their popularity. Concerts followed, for example the Rock'n'Roll Weekender Walldorf/G, the Streets Nationals in Hamburg/G. Giving concerts toge'ther with the Texabilly Rockets, the Rockabilly Mafia, Runnin' Wild, they have also supported the American Rock'n'Roll band Slick Fitty on their tour. In the beginning of 2005 they have recorded the new tracks to this album "We Call It Rare Rock'n'Roll" (PART RECORDS, Part CD 645.002). " We won't get pressed into any drawer, " that's the meaning of the band. Therefore their repertoire reaches from 80'ies Rockabilly about Hillbilly up to the 'authentic of style' and they prove their songwriter's qualities over and over again.