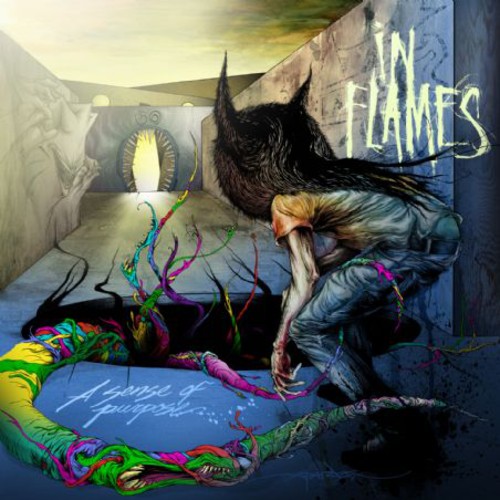 With a sales base that grows with each release, countless sold out shows and a Teflon brand name In Flames are poised to turn in their crowns as kings of the melodic death metal genre and truly step to the forefront of the metal world as one of it's major players. Unafraid to push boundaries with their previous releases, a SENSE OF PURPOSE finds the band taking yet another step forward. Still, there is the patented melodic metal style that the band is famous for, yet added to it is a new level of metallic riffing that will not only appeal to their old fans but open them up to a legion of new followers. Once again, In Flames have taken things to a new level musically that will certainly take them to a new level of popularity.

''A Sense of Purpose'' is the ninth studio album by melodic death metal band In Flames. The album was released in first Japan on March 25, 2008 with 15 tracks and later in Europe on April 4, 2008 through Nuclear Blast and through Koch Records in North America on April 1. The album was also released in a limited edition boxset version of which only 1500 copies were made. This release became available on the same day as the European release. This is the band's last album to feature any of the original band members (founding guitarist Jesper Strömblad quit in early 2010).

The lead single "The Mirror's Truth" was officially released on March 7, 2008 and was featured in the video game Madden NFL 09. The album also received a Parental Advisory label, making the album the only In Flames album to have explicit lyrics since ''Lunar Strain'' except for the song "Watch Them Feed" from their ''Trigger'' EP. The album is the first studio album since ''Clayman'' to feature the band's icon, the "Jester Head", on the cover art. The song "The Chosen Pessimist" is the longest recorded In Flames song.

On April 10, the album debuted at number 1 on the official Swedish album chart. It also debuted at number 28 on the ''Billboard'' 200 albums chart. According to worldwidealbums.net, ''A Sense of Purpose'' has sold 295,000 copies worldwide.

On the limited edition of the album, the bonus DVD that comes with the CD is a 160-minute making of the album documentary. In the documentary, it is stated that they recorded 17 songs and used 12 for the album and another three for the single. This makes two previously unknown songs that have not been released yet. In honor of the launch of the album, In Flames launched a special fansite that uses the In Flames icon, the "Jester Head." The artwork for the album cover was done by Alex Pardee, who has created all the cover art for The Used and Aiden's album ''Conviction''.

In 2009 the album sold gold in Sweden. - Wikipedia