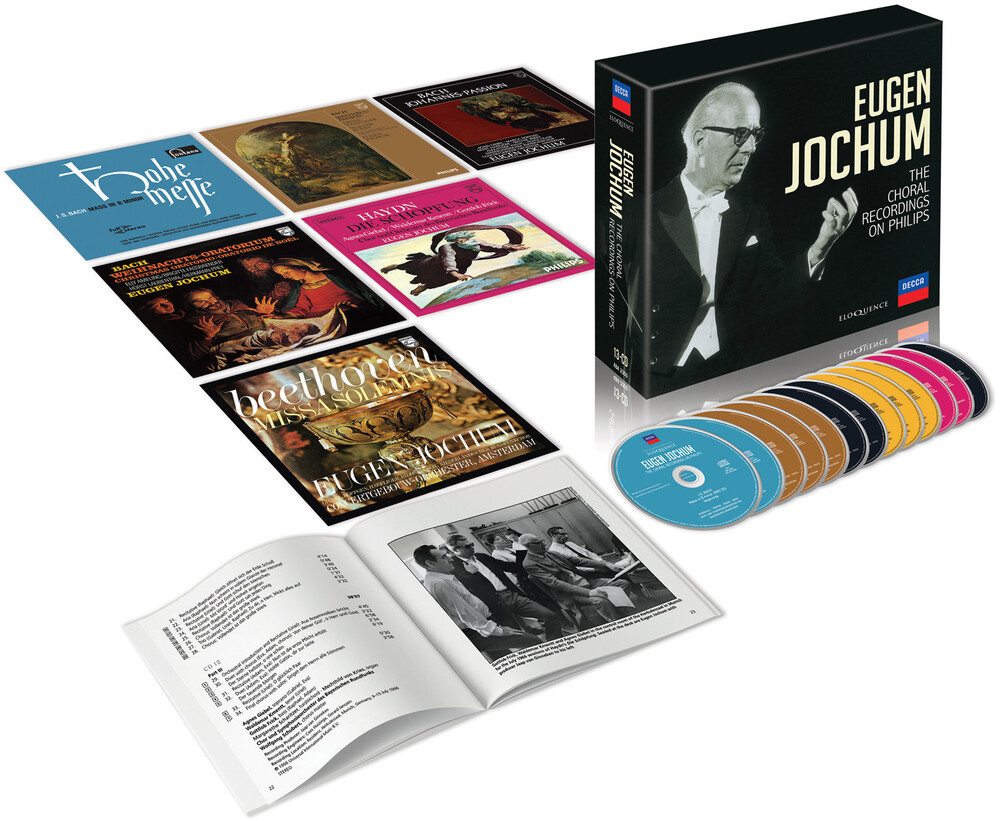 Eugen Jochum's complete recordings of choral / sacred music for Philips collected together for the first time. Includes the rare Rudolf Mengelberg Magnificat. Born into a Catholic family of Bavarian musicians, Eugen Jochum was playing the organ and conducting his father's choir as a child. Late in life he became renowned as a Bruckner specialist, as he acknowledged, 'but I began with the music of Bach, Mozart and Beethoven. And it is to their music that I still feel closest'. Even as the period-instrument movement gathered momentum during the 1960s, Jochum refused to relinquish Bach to historical specialists. He wrote an extensive essay on the interpretation of Bach's St. Matthew Passion in the 1960s. 'Even nearer to my heart,' he said, 'is the B minor Mass, the most spiritual work in the repertory.' For Philips he recorded the four great pillars of Bach's sacred music between 1958 (B minor Mass) and 1973 (Christmas Oratorio). His interpretations tread a scrupulous, devotional middle way between stylistic traditions: 'I don't think it matters too much if you use a large or a small choir, old or new instruments; what they must be is lively and dramatic. Expression is the heart of the matter'. The understanding of dance rhythm and momentum which distinguish Jochum's Bruckner performances also inflect his Bach recordings, notably enhanced by his ability to get singers to engage with the meaning of the text. Jochum established his Wagnerian credentials early in his career with a superb TannhĂ¤user, and his passions extended far beyond music for the church and concert-hall. He had a huge musical personality, but what continues to impress across his discography is his ability to know when and how to apply the components of that personality to the repertoire at hand. This master of rubato could stick with a lively and steady tempo to great effect in the great choral fugues of Haydn's Creation and Beethoven's Missa solemnis, and this master of forward motion also knew when to stop and let the music breathe, in the Beethoven's 'Sanctus-Benedictus' above all. This Eloquence box is offered as a companion to Jochum's complete orchestral recordings for Philips. It is enhanced by some of the finest Bach singers of their day - Ernst Haefliger, Walter Berry and Agnes Giebel notable among them - and the superb principals of the Concertgebouw such as Han de Vries (oboe), Hubert Barwahser (flute) and Anner Bijlsma (cello), all of whom went on to pursue careers as solo-musicians. The Christmas Oratorio and The Creation feature the Bavarian Radio Symphony Orchestra and local choirs, with whom Jochum had enjoyed a fruitful relationship since becoming their principal conductor in 1949. Niek Nelissen provides the insightful notes, including fascinating observations surrounding the recording sessions, and the booklet is enhanced with several rare photographs.