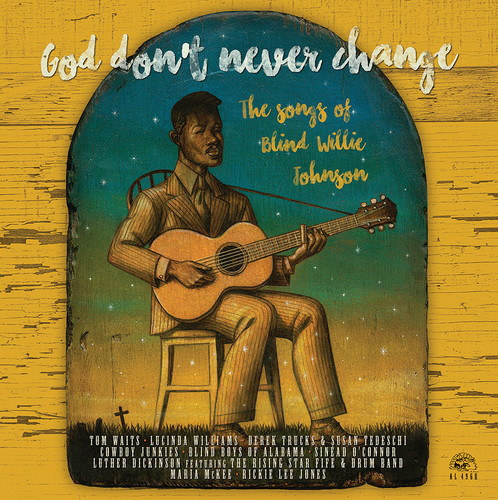 A stunning collection of artists and performances celebrate the timeless appeal of legendary gospel bluesman Blind Willie Johnson. TOM WAITS – The Soul Of A Man and John The Revelator LUCINDA WILLIAMS – It’s Nobody’s Fault But Mine and God Don’t Never Change DEREK TRUCKS AND SUSAN TEDESCHI – Keep Your Lamp Trimmed And Burning COWBOY JUNKIES – Jesus Is Coming Soon THE BLIND BOYS OF ALABAMA – Mother’s Children Have A Hard Time SINEAD O’CONNOR – Trouble Will Soon Be Over LUTHER DICKINSON featuring THE RISING STAR FIFE & DRUM BAND – Bye And Bye I’m Going To See The King MARIA MCKEE – Let Your Light Shine On Me RICKIE LEE JONES – Dark Was The Night--Cold Was The Ground Blind Willie Johnson’s seminal songs have inspired artists like Led Zeppelin, Bob Dylan and Eric Clapton to interpret his musical vision.

Produced by Jeffrey Gaskill, who helmed 2003’s Gotta Serve Somebody: The Gospel Songs Of Bob Dylan, GOD DON’T NEVER CHANGE hits artistic pay dirt like few tribute albums have, and is brimming with outstanding performances by some of the biggest names in music. The artists are well-chosen and totally committed, and the new versions capture the raw beauty of the original recordings. There’s not a false note in the batch and moments of revelation are everywhere. From Sinead O’Connor’s righteous cries on Trouble Will Soon Be Over and Derek Trucks’ and Susan Tedeschi’s reverent reading of Keep Your Lamp Trimmed And Burning, from Lucinda Williams’ slide guitar-fueled lament in Nobody’s Fault But Mine and Tom Waits’ virtual embodiment of Johnson himself on John The Revelator, this record is packed with transcendent recordings that speak as much to the greatness of the performers as they do the enduring legacy of Blind Willie Johnson. Available on compact disc and vinyl LP with download card.